Please tell us which country and city you'd like to see the weather in. 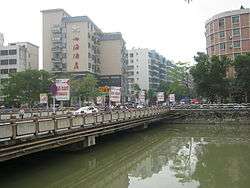 Yunfu is considered sub-tropical and enjoys fine weather year round, characterized by mild air temperatures, plentiful rainfall and sunshine, with an annual average temperature of 22 °C, annual average rainfall of 1,670.5mm and annual average sunshine hours of 1,418. The time-space distribution of rainfall is uneven in a year. It is overcast and dry in spring, hot and rainy in the summer, cool in autumn, and dry and sunny in winter.

With 324 National Highway running through the whole prefecture, cement-paved roads are accessible to each single township and village. Guangzhou-Wuzhou Expressway linking Guangdong and Guangxi is also connected to Yunfu which will further be united with Yulin and Wuzhou in Guangxi as well as the expressway network in southwest China. Sanshui-Maoming Railway also passes the whole municipality, which will be eventually linked to Luoyang-Zhanjiang Railway in 2008. The Xijiang River has 100 kilometers of waterway, enabling direct cargo freight to Hong Kong.